The Patient Protection and Affordable Care Act is now the law of the land. On Tuesday, March 23, 2010.

President Obama signed into law H.R 3590, a sweeping overhaul of the nation’s health care system, approved by the Senate on Christmas Eve and by the House of Representatives on Sunday. The House also approved a package of changes – agreed to in negotiations among House and Senate Democrats and the White House – which is being considered by the Senate. The legislation will tighten regulation of insurance companies and will extend coverage to more than 30 million uninsured Americans.Health care reform is needed to change the status quo which put huge strains on our economy as well as allowing the insurance corporations unfair advantages when their policyholders needed them to live up to their contracts. A study done at Harvard University indicates that this is the biggest cause of bankruptcy, representing 62% of all personal bankruptcies. One of the interesting caveats of this study shows that 78% of filers had some form of health insurance, thus bucking the myth that medical bills affect only the uninsured.

More details on the bill…

Union members across America worked tirelessly to help pass this bill. And our efforts made a difference in this fight:

There have been many lies and distortions about this legislation. Bob Herbert, an op-ed columnist for the New York Times wrote on 3/24/10:

“If you’re all fired up about Republican-inspired tales of Democrats planning to send grandma to some death chamber, you’ll never understand the G.O.P.’s war against the right of ordinary workers to organize and negotiate in their own best interests – a war that has diminished living standards for working people for decades.”

For your information, below is a synopsis of some of the main improvements to health care that H.R. 3590 achieves:

1. An End To Pre-Existing Conditions – Health Insurers cannot deny children health insurance because of pre-existing conditions. A ban on the discrimination in adults will take effect in 2014.

2. Small Business Tax Credits – Businesses with fewer than 50 employees will get tax credits covering up to 50% of employee premiums.

3. Seniors Get ‘Donut Hole’ Rebate – Seniors will get a rebate to fill the so-called “donut hole” in Medicare drug coverage, which severely limits prescription medication coverage expenditures over $2,700. As of next year, 50 percent of the donut hole will be filled.

4. More Young Adults Covered On Parents’ Plans – The cut-off age for young adults to continue to be covered by their parents’ health insurance rises to the age 26.

5. No Lifetime Caps – Lifetime caps on the amount of insurance an individual can have will be banned. Annual caps will be limited, and banned in 2014.

6. Adults With Pre-Existing Conditions Covered – A temporary high-risk pool will be set up to cover adults with pre-existing conditions. Health care exchanges will eliminate the program in 2014.

7. New Insurance Plans Must Include Preventative Care – New plans must cover checkups and other preventative care without co-pays. All plans will be affected by 2018

8. The End Of ‘Rescissions’ – Insurance companies can no longer cut someone when he or she gets sick.

9. Transparency In Insurance Companies – Insurers must now reveal how much money is spent on overhead.

11. Indoor Tanning Services Tax – This tax will impose a ten percent tax on indoor tanning services. This tax, which replaced the proposed tax on cosmetic surgery, would be effective for services on or after July 1, 2010.

13. Medicare Expansion To Rural Areas – Medicare payment protections will be extended to small rural hospitals and other health care facilities that have a small number of Medicare patients

15. Nutrient Content Disclosure – Chain restaurants will be required to provide a “nutrient content disclosure statement” alongside their items. Expect to see calories listed both on in-store and drive-through menus of fast-food restaurants sometime soon

16. Better Coverage For Early Retirees – The bill establishes a temporary program for companies that provide early retiree health benefits for those ages 55-64 in order to help reduce the often-expensive cost of that coverage.

17. Better Consumer Information On The Web – The Secretary of Health and Human Services will set up a new Web site to make it easy for Americans in any state to seek out affordable health insurance options The site will also include helpful information for small businesses

18. Encouraging Investment in New Therapies – A two-year temporary credit (up to a maximum of $1 billion) is in the bill to encourage investment in new therapies for the prevention and treatment of diseases.

Local 83 understands the importance of being politically active. Our Union’s involvement in Legislative Issues and Political Action is vital if we intend to succeed in our constant battle for the good paying jobs that our members deserve. When our members participate in political action or attend town hall meetings, we create a foundation to build strong political relationships that are essential in lobbying for laws that not only benefit us, but all working people. We are neither Democratic or Republican. We beleive that every elected official is subject to hurting or helping us, so we make it a point to keep them all honest.

This type of involvement not only helps Local 83’s membership, but all other unions and working people alike. When seeking the support of elected officials, we must first show that we are familiar with the issues in order for them to take us seriously. Once that is established, the most important task of our union is to be persistent or no official will act on our behalf. That is where you come in. Elected officials often witness Local 83’s members mobilizing in support of new legislation or candidate support. The political community instantly recognizes how valuable we are in the political process. When we lobby for laws to protect working people, elected officials are often reminded by their staff of the impact that was demonstrated through our support. They know that when we care about an issue, we commit our full support whenever necessary.

To get involved with the Local 83’s political efforts, or to find out how you can help your union gain a voice in local, state and federal legislation, contact the Local 83 Union Office. You can also speak with your shop steward or attend a General Membership Meeting and discuss politics there. We encourage our members to volunteer and become Democratic or Republican Committee members and to stay on top of your local town, county and state elected officials. And remember, when it comes to politics, all politics is local!

Sign Up for COPE! You can make a contribution to the Committee on Political Education (COPE) easily through a check off. This is a great way to help out our unions political efforts. Please call the union office for more details. 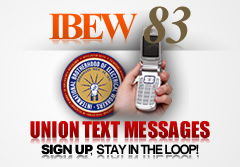